Dr. Billi Gordon
Think of the most interesting man you know. Now imagine what he would be like had he grown up in a tarpaper shack without indoor plumbing, joined a monastery, had an extensive career as a female model, actress, author and screen writer, then traded in his weave and acrylic nails for a Ph.D. in neuroscience. If you have been able to conjure up that image, turn it up to 11... and let's do it!!

Yesterday, Michigan lost at home to MSU for the third year in a row.  Many of the Michigan Faithful, myself included, said, “Rodriguez must go”.   Something we have been saying since day one—not because he’s not a good coach —he’s an excellent coach, but because he’s not “a Michigan man” and thereby not suited to lead the Michigan Football Team, which is much more than merely coaching a collegiate team.
A MSU fan wrote on my Facebook page yesterday: “You Michigan fans are all the same.  As soon as you lose you want to fire the coach…” That couldn’t be further from the truth.  Michigan Football is the most successful program in college football history.  That position can be liken to the consensual reality of class—only the middle and lower are concerned with it.  We are not, and never have been, in mid or the rear guard.  We’re, as the fight song says, “the leaders and best.”  Being the leader and best is not about winning, losing, offenses, defenses or coaches.  It is about tradition.
Traditions are long-established customs or beliefs handed down from generation to generation, viewed as a set of precedents valued by a particular group of people.  Immodestly perhaps, the cardinal tenet of  “The Michigan Difference” is that we are a cerebral, competitive, exceptional group of people destined to be the leaders and best in whatever avocation.  That is a climate, not a weather condition.  Losing a football game is a thunderstorm—not a climate.
The Michigan Faithful will never embrace Rich Rodriguez no matter how many games he wins.   Case in point: yesterday, it was late in the fourth quarter.  It was a long 4th down.  We were down by 17.  Rodriguez elected to punt, rather than to go for it.   The way our offense had been stalling, odds were we weren’t going to make it.  So what?  You miss 100% of the shots you do not take.  By punting, it increased the likelihood of losing 34 to 17, opposed to 41 to 17.  Based on Rich Rod’s decision, that was more important than trying to win.
There in lies the problem.   Collegiate athletics is about strengthening character and promoting leadership.  It is not about winning or losing games.   There is no character in giving up before the game is over.  That is not something a Michigan man would do.  What kind of message does that send to the youth and to the world?  The fact that he would do that is evidence that he does not inherently understand the concept of “the leaders and best”.  Doing that in a rivalry game says that he won’t last long at Michigan.
He won’t be happy at Michigan, nor will we be happy with him because he's not steeped in the tradition of Michigan.   Just as Harbaugh won’t be happy at Stanford—he’s a Michigan man, not a Stanford man.   They are two very different traditions.  True, he was born in Palo Alto, but Michigan men are born all over the world.  Just like Pete Carroll destroyed USC, Rich Rodriguez could potentially do the same to Michigan.   He’s already had to be chastised by the NCAA—not good,  not acceptable.    Rodriguez said publicly, “People in Ann Arbor take football too seriously”.   Excuse me, you are whose football coach?
It has been 3 years.   Rodriguez has no defense in place, and no special teams.   Explosive offenses sell tickets, but defenses win championships.  To sportscasters that says something about his foresight as a coach, but that's really not the issue here.   This is not about a coach.  The issue is preserving a tradition.


“Champions of the West!” is the last line in the Michigan fight song.  Most people would define champion as a person or team who wins a contest, competition or tournament.   However, at Michigan we abide by the true definition of champion—somebody who exemplifies excellence and achievement.  Excellence transcends winning or losing, and permeates the entire being—and that my friend is “The Michigan Difference”.  It is intrinsic, not acquired, which is the essence of tradition.
Posted by Dr. Billi Gordon at 10:37 AM 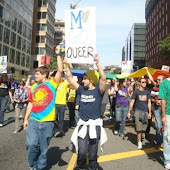 Be Fabulous, Phenomenal, AND....
Ferocious!